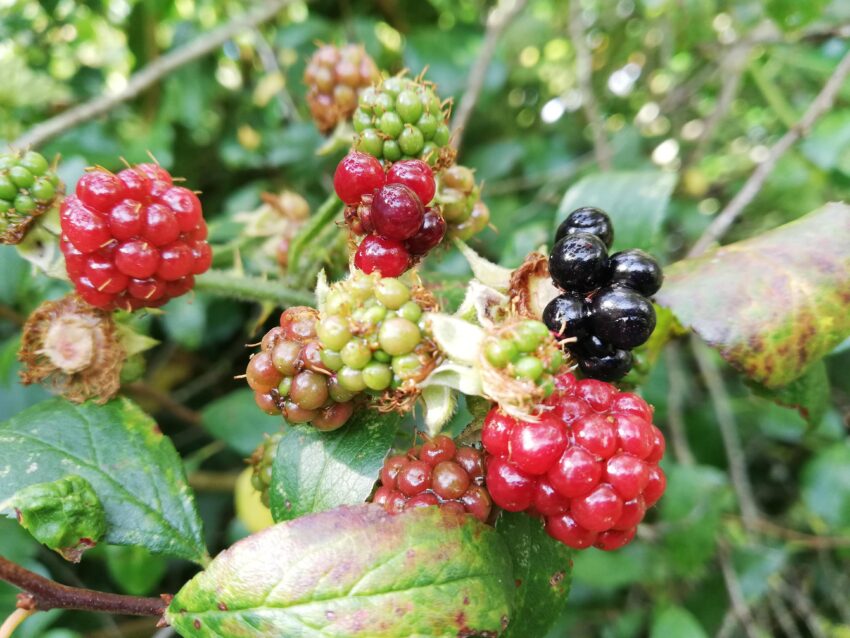 Like most dog walkers, we regularly walk the same ways with Cooper. One of these is a there-and-back again which runs along the footpath alongside our garden through into Gorwyn’s Field, down past Furlongs and over Lower Creedy bridge, along Thornedges to the river.

John is often in his garden as we pass and we call a hello to him and to his chickens, the new contingent settled now amongst the old guard. They are producing a plentiful supply of eggs which John sells, along with tomatoes tasting of summer, from a box attached to his fence. His dahlias are a sweet shop confection of pinks and yellows, his apple tree weighed down with dozens of ripened apples. One morning I see John pressing apples for juice or cider and realise that we could do the same.

Sometimes I meet Colin, his binoculars swinging around his neck, and we talk about the birds he’s seen. The maize has been cut, so the Meadow pipits have returned to pick up the chaff from between the yellow stubble which sticks, like a lockdown haircut, out of the red earth. We talk about the swallows gathering on the wires in the village and he tells me how their ability to produce multiple broods each summer depends on the willingness of each brood to help feed the next, much as an eldest child might help to look after the youngest in a large family. I say how much we are missing the swifts and their electric shrieks which were audible even from the depths of our house in the long summer evenings. Young swifts, like surly teenagers, are more reluctant to help out, he tells me, meaning fewer broods and an earlier flight home. I tell him how, in previous autumns, I loved to watch the murmurations of starlings down on the banks of the Tamar near our old home as the native population swelled with migrating birds from eastern Europe; the dash and whoosh and hush as they lifted and dropped, lifted and dropped, to chatter and roost in the rushes.

It is autumn now and the lanes and hedgerows are filled with bright red haws and rosehips, and a residue of hard-as-bullet blackberries, looking like so many red and black fruit pastels. The mustard yellow Tansy flowers have become black, Art Deco-shaped seed heads and there is a sweet, citrusy tang in the air as the hedges begin to be cut. The fields have been humming with the sounds of combines and tractors as farmers race to make the most of the dry evenings to harvest silage and maize. Sometimes their exasperated drivers knock on our doors, unable to manoeuvre their huge vehicles past cars parked in Sandford’s narrow lanes.

Along Thornedges I stop to talk to calves sheltering, from our first rainfall in many weeks, under the outstretched arms of a giant oak. As they get to their feet, still shaky-legged, I think how this is probably their first experience of rain, how some instinct, in the absence of their mothers, has told them to shelter there. They come over to the gate to lick my hand with their rough, raspy tongues and huff their inquisitiveness at the dog, hovering a safe distance behind me. The lane is strewn with fat green acorns which shower down with the slightest breeze, knocking me on the head as if trying to shake me awake.

Returning from a walk one evening, Glen and I divert through the gentle hum of the square. People are climbing from their cars, returning home from work, and drinkers are lapping up the last of the sun on the cobbles outside The Lamb. We stop to compliment Richard on his prize-winning container display at the front of his cottage. It is a kaleidoscope of colour punctuated with threads of tumbling tomatoes. He takes one look at Cooper’s bandaged paw and says, “Wait there, I’ve got a pair of dog shoes!”. We listen to the sound of his feet going up and down stairs before he reappears with a pair of tiny red shoes. He leads us to the back of the cottage to show us how his garden continues, runner beans and nasturtiums scaling the wall on which he he hangs feeders, filled with a combination of specially cooked potato skins and fat for the birds, and the window from where he watches them feast as he eats his breakfast. He shows us secret Sandford – an alley of hidden houses, named appropriately after Clovelly – a row of chocolate box thatched cottages on a steep cobbled slope crowned by a gate leading to an orchard. He takes us to peek around his front door at his collection of paintings and stuffed foxes, “I don’t have wallpaper, I have pictures,” he says.

In Gorwyns field, where dog walkers unconsciously collect, stopping to chat while dogs run and play together in happy circles –  a kind of alternative village centre – an ecological study is underway. It’s to assess the environmental impact the proposed development, an extension of Creedy View, might have. It’s difficult not to feel sad at the thought of losing the communal space and the moles, mice, slow worms and invertebrates that help to feed the valley’s owls and birds. I have to remind myself that each of our houses were built as a result of the same process. Which piece of heath, moor or farm land, which copse, was cleared to build our houses? Which creatures were here before us? Lizzie and I laugh, conspiratorially, at the idea of planting Great crested newts under the carpet tiles laid out to monitor the wildlife, as our dogs, Katy and Cooper, hurl themselves through the long grass.